Cymdeithas yr Iaith Gymraeg (Welsh Language Society) is a group of people who campaign for the Welsh language and communities in Wales. The society believes that the campaign for Welsh is part of a wider world-wide struggle for minority rights and freedoms. Recently, the Cymdeithas published a document proposing to increase Welsh language speakers to 1 million. We asked questions related this document and other aspects related Welsh language struggle in Wales to Sioned Haf who is the international officer for Cymdeithas.

Are you a campaign group, observation organization or both? How do you work and organize your activities on behalf of the Welsh language?

Cymdeithas yr Iaith Gymraeg (The Welsh Language Society) is a campaign group made up of volunteers of all ages; Welsh speakers, learners and non-Welsh speakers, within and outside Wales, who are in agreement that pressure is needed on the Welsh government and incumbent players within various private sectors to contribute towards and ensure an environment that will allow for the sustainability, growth and viability of the Welsh language in Wales. We campaign in the fields of education, media, sustainability and language rights; and also have launched an international wing – allowing us to learn and share experiences of language campaigning activities amongst various minoritised language communities and languages faced with the threat of an increasingly homogenised world, across the world. We see our non-violent language campaigning as a part of an international movement for language and civil rights.

Why do you propose to increase Welsh speakers to 1 million? Is this figure a scientific necessity for protection of a language or it will have a psychological impact on Welsh society?

It is a target designed to raise the sights and ambitions of the Welsh Government and others; and to challenge the political parties to set out a plan to achieve it. We are calling on all political parties to respond our vision document by including proposals in their 2016 election manifestos which aim to meet the following three, equally important, objectives:

We are grateful that leading members of all the political parties in the National Assembly for Wales have already backed the three targets since the document was launched.

For the Welsh language to have a sustainable and prosperous future, more speakers are needed to use and pass the language on to future generations. We believe that people in Wales, who are born or have chosen to make Wales their home, should have equal rights to educational and life opportunities – including therefore the right to be fluent and confident and able to use the Welsh language in all walks of life. Wales after all is the home of the language. The population of Wales at the moment is just over 3 million. According to the recent Census, 19% of the Welsh population speak the language: just over half a million people. Our proposal, is to double this number.

You criticise Welsh government that it does not actively work for Welsh language. Why do you think that regional government doesn’t do enough for regional language in Wales?

The Welsh Government has not implemented the kind of bold policies needed to reverse the decline in the Welsh language. One of its principle deficiencies is a failure to act on the recommendations of a Professor Sioned Davies’ education report, which was commissioned by the government itself. The report recommended that every child should receive at least some degree of Welsh-medium education. At the moment, 79% of children leave school without ability to communicate fluently or work through the medium of Welsh because they are taught in English-medium schools. This is a monumental educational failure, and needs to be tackled urgently.

The Government has also not taken key measures to reduce out-migration from Wales – including a failure to end a tuition fees policy and secure affordable housing for every person.There are a number of other indicators which are also extremely problematic, including a significant under-investment in the promotion of the Welsh language.

Welsh government prepared a 5 year policy document for 2012-2017 namely “A Living Language: A Language for Living.” By offering your new programme for language, according to you what points of this document should be revised?

The Welsh Government’s five year strategy will need to be reviewed after the next election, but they have failed to deliver on a number of important points including education targets and the extension of Welsh language rights to the private sector. We would hope that any new strategy adopts many of the proposals in our 2016 vision document.

You mention in your last programme that Gwynedd county as an example should be followed to increase Welsh speakers. What is the main characteristics of Gwynedd language policy?

Gwynedd as a county has the most number of Welsh speakers per capita in Wales. This is partly due to historical and geographic reasons, but also due to a progressive local attitude towards language protection and how to approach the furtherance and use of the language at all levels of life. There are two areas where Gwynedd has a particular lead. Firstly, in education, the vast majority of children and young people receive Welsh-medium education combined with extensive Welsh language immersion programmes for young people moving into the area. Secondly, because the local authority works the medium of Welsh, far more jobs are Welsh essential; fostering and normalising the use of the language. 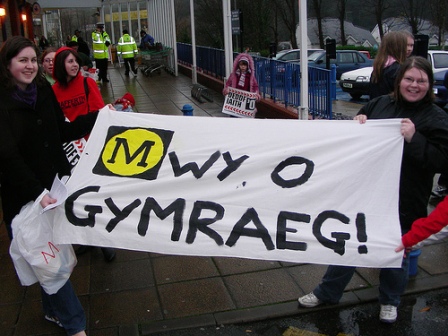 In response to the decline of Welsh, do you think it would be appropriate to establish higher percentages areas similar to Gaeltacht in Wales?

We do not support establishing a Gaeltacht in Wales. We believe in using a plethora of language policies to ensure that Welsh is the main community language in every single part of Wales.

What has changed in Wales in respect of the language panorama since 2011, the date when Welsh language was declared official alongside English?

It can be argued that official status, is a necessary, but insufficient condition of language growth. Our focus is now on campaigns such as ensuring Welsh-medium education for every child, more bodies working through the medium of Welsh, and affordable homes for all to reduce out-migration.

What are your expectations for the 2016 elections in Wales? Do you have hope for a new parliament and government actively participating Welsh Language revitalization?

We would hope whatever government gains power following the 2016 elections that they will adopt many of the policies set out in our vision document. They also need to act with urgency, in the fields of education, employment policies, rights and investment, to secure the growth and vitality ofthe language over the years and decades to come.

Necat Ayaz is an exiled Kurdish writer and journalist originally from Turkey. He is editor and founder of Infowelat online magazine since 2013. He has been living in Belgium since 2020. He is the author of Katalonya: Dirok Ziman Otonomi (Catalonia: History Language and Autonomy) and Ispanya”da Ozyonetimin Tarihi (The History of Self-Government in Spain).
Previous UNESCO: Di perwerdeyê de wekheviya zayendî kêm e
Next Kurmancîya Ermenîstanê û kurmancîya ”Hawar”ê wek hev e!