Infowelat: Considering a very large field of activities, how can we identify Kontseilua? Is it just a language movement organized at grassroots level or is it more than a language movement taking into account its work inside the local  administrations in Basque Country?

Paul Bilbao Sarria: Since 2005 things have changed. Now Bai Euskarari Agreement is a different organization. Kontseilua is one of the organization inside Bai Euskarari. It was a project of Kontseilua but we decided to put it off. Because we thought that that project needs more independence.

Infowelat: Don’t you have some relations with administration and political organization?

B.Sarria: Yes, we have relations with administration, political parties and trade unions.  You must think that we are also powerful. All the organizations inside Kontseilua have thousands of members. For example, all the parents of the children in Basque language immersion schools indirectly are the members of Kontseilua. So the political parties and institutions know that when the Secretary General speaks it doesn’t speak on behalf of him but he speaks on behalf of all Basque language civil society. When we have some proposals regarding what should be the correct language policy for Basque Country, the politicians know this proposal has been approved by all these entities 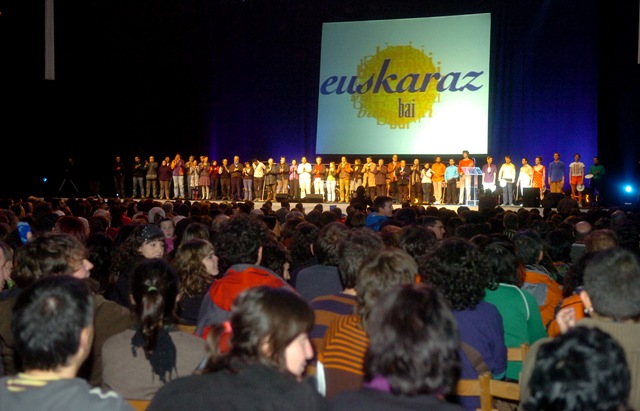 Infowelat: What does Kontseilua do for Basque language normalization? What has it achieved until now in terms of its short and long term plans since its creation in 1998?

B.Sarria: Kontseilua works in two areas: Political and social. In political area we have made different proposals to change the language policy. We have examined all the language policies in Basque Country. These policies are belong to Spanish state, French State, Basque Autonomous Community, the Community of Navarre and we have prepared interesting documents. Some people say that we only criticise. That is not true. When we criticise something we always suggest an alternative. In the political issues we have made a lot of proposals. One of them is the one which I proposed yesterday at symposium in Amed (Diyarbakir) that when all the students in Basque Country finish the compulsory study they must be multilingual. There is another proposal to promote Basque language in socio-economic arena. With other proposal we promote Basque language in municipalities.

Infowelat: Can you give some information about how many person have participated this campaign until now? And in which parts of Basque Country have you been much successful?

B.Sarria: It is very difficult to give the exact number. Big cities and small towns are different each other regarding achievement of our campaign. For instance it is very difficult to enforce Basque language in Bilbao even though the highest number of speakers is there. But the problem is that the rate of Basque speakers is not high comparing the Spanish speakers. We think that we must start to work in big cities. If you are going to revitalize language there are two dimensions: Firstly, you need to create speakers but only creating speakers you cannot live in one language. You need to create spaces where you will be able to speak Basque. In my opinion the language policies have taking into account that they must create the speakers but they have forgotten that they must have create spaces. If I want to go to cinema, I have no chance to watch a film in Basque language. We only have one public TV channels in Basque language and some of the programmes of it are sport programme and there are not every genre. We have only one Basque language newspaper founded by civil society. We think that Basque society have chance to use Basque language everywhere. Why the government put a lot of advertisement in newspapers. Why don’t the government approve rules saying that they are going to put advertisement in newspapers only which if there are something in Basque language. This is a language policy that you don’t invest any money and as a result these newspapers will have to change.

We have asked government that there have been a lot of things that you can do without spending any money. According to the law they must put the advertisement in the newspapers which have big circulation. For sure the Basque government can change this rule. I propose to accept a new rule saying that the advertisements are given to the newspapers which at least % 10 of the content are in Basque. By doing this we create another space for Basque language. Another example is the labels of goods or products. When I buy something I want to see this product in Basque language. Why do I have to see the products in Spanish and Portuguese? Normally in Spain allthe product are in these languages. Because the big companies sell the same bilingual products in Spain and Portugal. Why don’t you put into force a rule that asks if you want to sell a product in Basque Country at least it must be in Basque also.

Necat Ayaz is an exiled Kurdish writer and journalist originally from Turkey. He is editor and founder of Infowelat online magazine since 2013. He has been living in Belgium since 2020. He is the author of Katalonya: Dirok Ziman Otonomi (Catalonia: History Language and Autonomy) and Ispanya”da Ozyonetimin Tarihi (The History of Self-Government in Spain).
Previous Poloniyên li Ûkraynayê daxwaza xweseriyê dikin
Next The situation of indigenous people in the world