Înfowelat: Considering the existence of Ehl-i Heq believers and a different dialect of Kurdish which is open to Persian influence in this southernmost border of Kurdistan, is it possible to speak about very different religious and linguistics life in this city?

What is the percentage of Kurdish people live in Kermanshah?

Kermanshah is a Kurdish city. I think more than % 90 of the population of Kermanshah are Kurdish. There is a non-Kurdish minority coming from other parts of Iran. Some parts of Loristan like Nurabad and some parts near Kuhdesht are Ehl-i Heq. And the culture in Loristan is like Yarisani culture. Despite most of the people are Shia believers, the culture is very similar to Yarsani culture. I think the main reason for this is in the past all of them were Yarisani. We have some sentences like ‘biçû kir Dawid li dorê.’ It means ‘David will take care of you.’ This is purely a Yarsani saying but currently Loristani people use this same sentence.

Is the most of the population in Kermanshah still consists of Yarisani people? 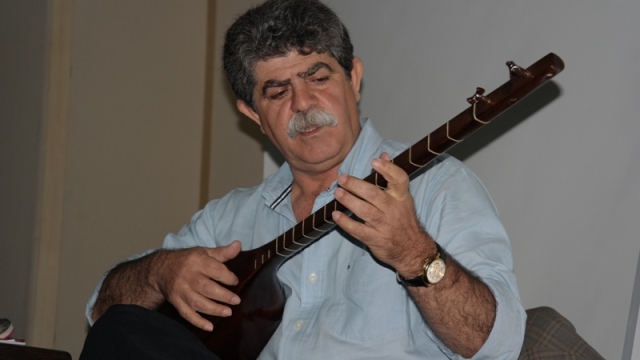 It is said that there is a big Persian influence on Kurdish dialect spoken in Kermanshah and much usage of Persian inside the city center which is also create a base for allegations such as that people of Kermanshah are Persian. What would you say about this allegations?

For a long time, all education sector have been used Persian as the language of instruction and also the Persian has been the language of the television and press. The many of the families have preferred Persian as the language of the family to ensure the Persian ability of their children. I see the same problem in Amed too. Many of the young people use Turkish language. Because you have had language freedom just for ten years. In Kermanshah we have had a big problem like the problems you face here. In Turkey the rulers denied the existence of the Kurds. In Iran this was not existed. They told us “Ok you are Kurds but please speak Persian.” When you ask to the young people who speak Persian ‘What is your ethnic identity?’ they would say ‘Men Kurd este’ in Persian which means ‘I’m Kurd.’(Mr. Moradi laughs). Every village, every small or big town around Kermanshah are Kurd like most of the population living in the city centre. So it is nonsense to say that the people of Kermanshah are Persian moving from the Persian influence or the extend of Persian usage among its citizens.  Now the situation is better in terms of Kurdish language usage among the people.

What kind of original maqamsand melodies the Kurdish music have comparing with Persian music?

In Iran every parts have some original musics. Iranian Classical Music is the only common classical music for the Persians and for the other people too. Because among the Persian classical music there are some songs taken from the other parts of Iran. For example, there is a maqam called Kurd-i Beyat located in the Redif of Iranian Classical Music. There are also Gilaki, Nehawend and some other songs.

I think Kurdistan is the most important part for Iranian music. In Kermanshah we have three old music like Ûre, Mûr, Siya Çemane and Tenbur music namely Tenbur-terz. Add to these, between one or two thousand melodies of Redif which belong to Iranian Classical Music are existed. In Iran they say they have seven Dezgah, Mahûş, Şûr, Sêgah Çargah, Rast pêncgah, Newa and five Awaz deştî, Ebû etah, Îsfahani and Efşarî. We have more than one or two thousand melodies in this Dezgah and all of them are Kurdish. Kermanshah is very important for  music because beside the existence of this old music we can add to this list the music of Khanaqin which is Kadirî and Nexşîbendî. All them are Kurdish. Some decades ago, many of these musicians of Iranian Classical Music including famous musicians used to make Kurdish music and play Kurdish instruments. For example instrument like Def has come to Iranian music during this time. It came from Khanaqin. 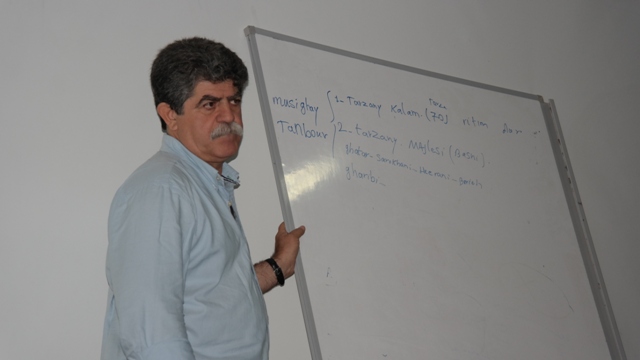 Do you have any music academy or school for Kurdish Music in Kermanshah or in elsewhere of Eastern Kurdistan?

You are one of the living master of Kurdish Tenbûr which is considered as sacred by Kurdish sufi tradition. What kind of proofs do you have to claim that Tenbûr is Kurdish instrument?

Everything has its origin in the past. Tenbûr is 5000 years old. First we can say that this instrument is an Eastern instrument. Before Iran, Yarisan and before everything it was Eastern. From one thousand years ago until now, this instrument has been chosen like a religion instrument for Yarisan by Holy man Şaxûşîn. He was a Lor Kurd. If we buy a house ten years ago, we show a document showing that it has been belong to us for ten years. If we have played it for one thousand years with admire, then we can easily say that Tenbûr is belong to the Kurds. Among the Kurds we find this kind of Tenbûr which is also called Dîwan. There are many kinds of Tenbûr in the West. We have a kind of Tenbûr in Kermashan, Amed, Dersim and in Kakai region of Iraq. There is another ten Tenbûr in Horasan which is called Dota and in some regions they call it Tûtar. It is name is Tenbûrek in Balochistan. In Farabi, there are two kinds Tenbûr: Xorasanî an Tîsfunî. Tisfun was the capital of Sasanian Empire and is situated in Iranian Kurdistan.

In Turkey some musical authorities claimed that Tenbûr used in people’s musical tradition came from Kopuz which is still used by Turkic people of Central Asia. What would you say about this?

I don’t know about Turkish music. It is a mix of Kurdish, Arabic and Greek music. Kopuz is very different but my Tenbûr is very near to your Tenbûr (which is used in Northern Kurdistan). They are not very different each other. One of the main differences between Kopuz and Kurdish Tenbûr is the melody. If you play Kurdish, every instrument has special personality. For example, when you play some melody from European Music with Tenbûr, everybody understands that it is not the Tenbûr’s melody. The Tenbûr is not suitable for this purpose.

You told during the workshop at Cegerxwin Academy that you had intention to create a school for Kurdish Music in your hometown. Can you give more information about this project?

I have a large family land in Kermashdan which is several thousand metres wide. Ten years ago, I began to build a big school for a Tenburxane which would be 1000 m. I would have some classes, a garden and all the other necessary things inside this building. During the last President of Iran, they did not let me to continue. I’m going to ask permission another time but I guess that they will not let me to finish my project. I want to make it a center for Kurdish Music especially for Tenbûr if I get permission.

Kermashan administration is planning to take place a musical festival next year. They asked for my help to invite the musicians from some parts of the world to this festival (he laughs) but on the other hand they don’t allow me to open a Kurdish music school. I have also a small place in Tehran where I have a permission to teach Tenbûr. One time in three weeks I go there to teach it.

Do you believe that there are some commons between Yarisani people of Kermashan and Alawites people of Dersim?

All of these people including Yarisanis, Yezidis, Kakais, Alawites and Bektashis were Mitrayids (believer of the Sun). None of these people have mosque but they have cemxane. Nobody of them practice prayer five times a day like Sunnies. Except Alawites in Dersim, all of these people concentrate in geographical places which are very near to each other. And for Dersim, it is highly possible that the Alawite people migrate there from this geographical center I speak about.

During your three days in Amed you have met many young musicians from Cegerxwin and Aram Tigran academies. What is your opinion about the progress Kurdish music have made in this part of Kurdistan and what are your suggestions for young Kurdish musicians living here?

I think these young people have a good chance because they live in a period that there are two centres for them. What is the most important is that they are paid by şaredari (municipality). In Iran, there is no such an example that someone are paid for their musical work including Persian people by municipalities and other public organizations. I think these young musicians can use this period better for Kurdish Music. They should collect every old music in Amed, Dersim, Mardin etc. and compare them each other and after that they should make melodies and compose music on these maqams but not based on other music especially European Music. It is possible also to create a orchestra playing Kurdish instruments.

But how many Kurdish instruments are there to be used for this orchestra?

They can use Kemançe, Qawal, Zirna, dahol, Cûra and many kinds of Tenbûr. And there are good singers. Ask from dengbêj to sing the parts that are not written. They can also ask stranbej to sing the written parts. I think there are a lot of materials and many good musicians. All of these young people are good musicians. If they go right way and make xebat (work) for Kurdish music they will succeed. Because there is an opportunity as municipality helps them. In Iraqi Kurdistan, there are much money but they don’t do anything for Kurdish Music. They invite pop Iranian musicians from Los Angeles. There are a lot of TV channels there but indeed they do nothing for Kurdish Music. For example, there is a musician namely Luti who sings in wedding parties and this man is considered as big musician by them.

Would you like to come to Amed to teach Kurdish Music if you get an invitation from municipality?

Yes, for sure I will come but for one year I have some works in the field of music in Iran. After finishing my work, I will be very happy to give positive answer to such an invitation.

We would like to thank to Şiyar Ayaz who is a teacher of Kurdish Music at Cegerxwin Academy in Amed/Diyarbakir for his contribution to this interview.

Necat Ayaz is an exiled Kurdish writer and journalist originally from Turkey. He is editor and founder of Infowelat online magazine since 2013. He has been living in Belgium since 2020. He is the author of Katalonya: Dirok Ziman Otonomi (Catalonia: History Language and Autonomy) and Ispanya”da Ozyonetimin Tarihi (The History of Self-Government in Spain).
Previous Di hilbijartinên PE’yê de rewşa partiyên xweserîxwaz û serxwebûnxwaz
Next Between Light and Shadow: Marcos’ last words